Heptapod: the complete guide from Docker to CI/CD

THUX offers a comprehensive easy guide to get Heptapod (GitLab with Mercurial) deployed using Docker behind a Træfik load balancer. The final setup is completed by activation of the built-in Docker registry and runners for optimal CI/CD.

Discover the guide to Heptapod:

The goal of this post is to bolster the adoption of Heptapod through the very few steps really needed to get it working via docker and get a complete setup with working CI (Continuous Integration) and registry for the image produced within the CI.

The target of the article are system administrators with a little knowledge of docker. No previous knowledge of Gitlab is required as we’ll lead you through the main concepts.

THUX has always used mercurial as the Version Control System of choice for our code and in the last years we hosted the repositories in Bitbucket, until the moment the infamous decision of Bitbucket to discontinue the support of mercurial forced us to take a decision.
We considered switching to git but I didn’t like to do that just for a non-technical reason and we definitely like mercurial more than git.

Heptapod came to the rescue, especially its docker image, ready to deploy in no-time. Heptapod brings Mercurial SCM support to Gitlab, so that any feature of gitlab is available to the Mercurial world.
It honestly took some time to get to the final configuration, but in hindsight it all was just very simple and can be replicated with no effort by anybody just following the right directions.

Let’s start from the big picture to offer a sneak peak of the outcome: We will take for granted you have a server with docker and docker-compose installed. Similarly I suppose you have 2 entries in DNS pointing to this server: one for the heptapod and one for the registry. The working configuration and a streamlined README can be downloaded from the public area of our Heptapod

As anticipated, we want to use mercurial via ssh so that we opted to change port of the docker server to 23 in /etc/ssh/sshd_config:

followed by a systemctl reload ssh.service

Træfik is a very useful load balancer, suited for the docker environment. We run it in a docker, it forwards http requests to other servers. In our case it forwards requests to other dockers.
It has several different “providers” that is to say, different ways to configure it’s routing. Here we use only the “docker” provider, that reads the docker socket to read the “labels” each docker can publish. This way, the configuration of the routing to a particular docker is delegated to that same docker and it is defined in its docker-compose.yml.
You can see how this mechanism is used to publish an internal dashboard of traefik:

that you can read as: all trafik to monitor.thux.it is to be routed to the service api@internal

Note we tell Træfik that it must request certificates to LetsEncrypt.
3 lines of configuration are enough to forget about ssl certificates from now on. As soon as Træfik receives from the label of a docker machine that it needs a certificate it will issue the request to LetsEncrypt for us and it will renew it when needed.

You can configure GitLab via file gitlab.rb (ruby syntax) or via the environment configuration GITLAB_OMNIBUS_CONFIG that will overwrite any configuration found in the default config template. I’ll follow this second possibility as it is easier to copy/paste and to keep updated when you update your docker image.
My docker-compose.yml starts as follows:

Before delving into the GitLab configuration, we can note:

As stated above we preferred to configure gitlab via variable GITLAB_OMNIBUS_CONFIG so we don’t need to mount a conf file and when we upgrade to a newer version of heptapod we’re sure any default will correctly be picked from the template. We can inspect the default configuration reading the file /etc/gitlab/gitlab.rb:

That file is exactly the default, while configuration from environment variable GITLAB_OMNIBUS_CONFIG is applied on top of that. You will need to look at it to know which values you can customize. In case you prefer to edit it directly remember to bind-mount it.

The first section is very easy to understand: it just enables email and configures the relay server.
The second section configures how to enable and serve registry service. As per our big picture, we decided to use Træfik to handle the ssl certificate so the connection between
træfik and gitlab is on port 80, that is what the nginx config part does. The result can be inspected by running:

Up to now we have not yet configured Træfik that knows nothing about our docker services. It’s time to add one more section in our docker-compose file:

Starting from the last 2 lines: docker informs Træfik that it offers 2 services on port 80 named hg and registry, these service names are used in the router definitions above. Each of the two blocks defines a router (named again hg and registry) with entry point port 443 (named web-secured in our Træfik docker-compose), how to get a certificate and which service should be attached to. Both services are handled by nginx that proxies them according to their domain name and we saw earlier an excerpt.

If we start this docker machine with command:

… and wait enough (some minutes) for the services to be started we should see a page where the password for the root user is prompted (“Please create a password for your new account”). That is where we set it. Going to administration area we should see something similar to this: 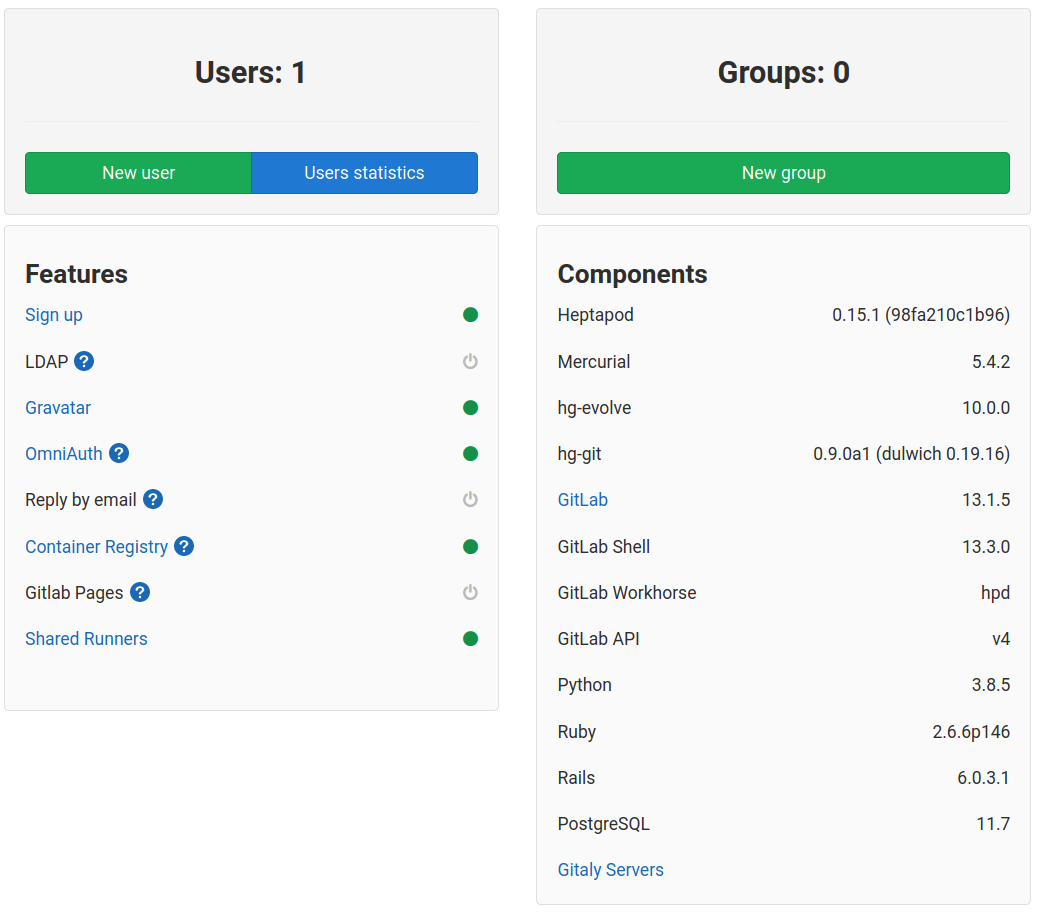 Should you fiddle around with gitlab-ctl, you should call it via exec. The proper way to invoke the help is:

So far so good! Shared Runners are enabled but we have none yet. Shared Runners are a key part in continuous integrations. They are the servers that execute the jobs. Each of our projects has a configuration file named .gitlab-ci.yml that dictates which jobs will be run on each commit and under which conditions. We could decide to check code quality, to run tests or to produce the docker image… we can decide to run some jobs on each commit and an image build on each commit of the default branch. The configuration of .gitlab-ci.yml is outside the scope of this article but I’ll give a couple examples to generate docker images as it goes along with different Runner configurations.

Let’s start from the docker-compose configurations for our runner:

To register a runner we need to get the token from the administration area, following “GitLab runner” link and run:

The registration process will prompt us with some simple questions and the result will be written to the config.toml. You can add more runners specialized in different jobs. After adding 2 runners and a little bit of hand editing, this is the resulting configuration:

A third option, that may be more secure, uses kaniko, a builder of docker images that doesn’t require root privileges.

You can test with a simple project. Let’s start with a fake Python project. No code and random dependencies:

The Dockerfile is very basic but uses BuildKit (a toolkit for converting source code to build artifacts in an efficient, expressive and repeatable manner - note the syntax = part, it's not a comment) that in turns implies caching is working::

Let’s now move on to preparing a couple of .gitlab-ci.yml for different runners.

Add our .gitlab-ci.yml, commit and push.
A little icon will appear in the project page indicating the state of the job, clicking on that icon will get you to a pipeline page where you can investigate what is going on. 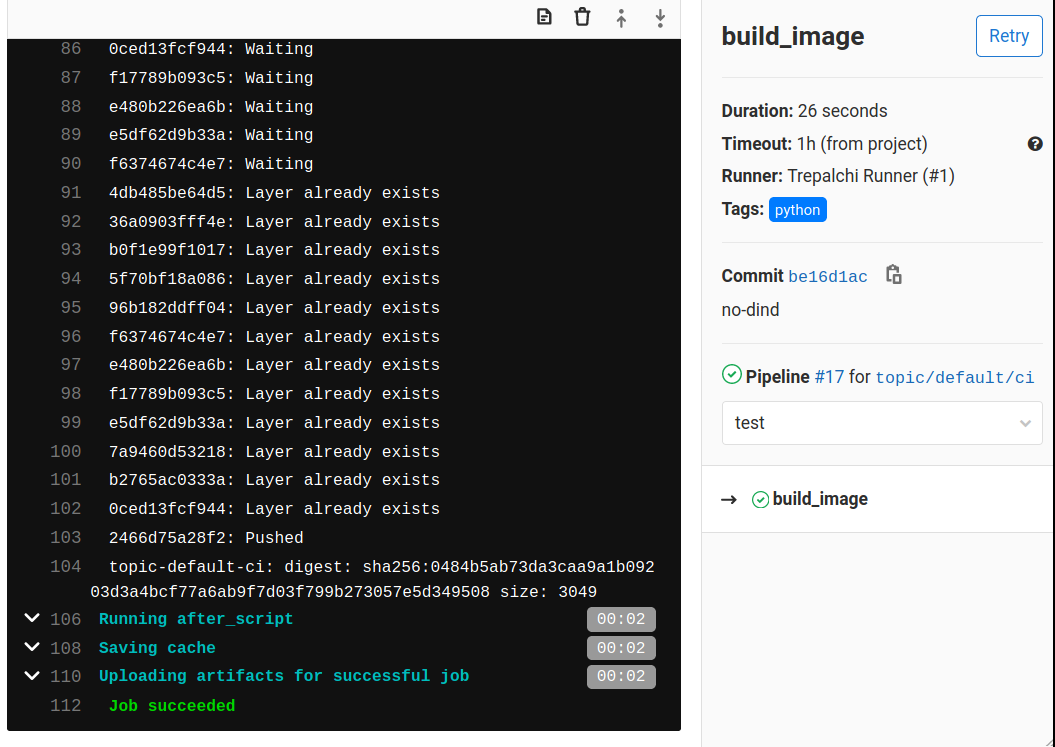 We want to thank the Octobus team for the effort done to add mercurial to Gitlab in this wonderful way. I found the team very helpful, a special mention goes to Georges Racinet. I would say it is not a minor detail to have good and prompt support. They’re also super reactive in the mercurial list and that makes it a perfect match.
We started investigating Heptapod just to have a shared repo for our code and we landed in a much more up-to-date setup than we were used before.

You can download the ready-to-use configuration from the public area of our Heptapod site.

This article is written and curated by Alessandro Dentella